Give Burglars the One–Two Punch 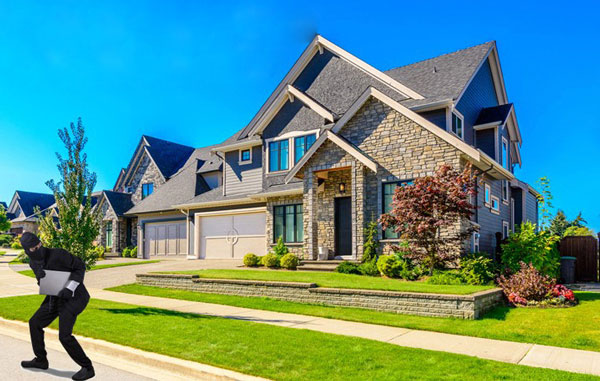 Pretend you are a burglar prowling through a neighborhood.

You come upon two very nice homes, neither of which have cars in either driveway so there’s a good chance no one is home.  You notice that house #1 has a home security yard sign next to their mailbox.  House #2 does not have a yard sign.

Now take a better look at house #1.  Do you see those video cameras pointing right at you from the side of the house? House #2 – no cameras, it’s all clear.

Which house is going to be targeted?

Read on for our “One-Two Punch” solution.

Studies show that most homes burglarized did not have a yard sign, or a security system.  If a burglar sees that a house might have a security system, they are more likely to seek a target that does not appear to have a security system.  EMC Security has case after case proving that damage and loss are mitigated with an operational security system.  When the siren sounds, it hastens the intruder’s unwelcome visit.   There are dozens of EMC Security customers, just this year, who report that once the alarm was triggered, all signs point to the intruder leaving immediately, without taking anything.  It was also the immediate dispatching of police from the monitoring center that helped occupants safe during a burglary.

If you add security cameras, or a video doorbell to your security system, it’s a one-two punch.   According to a report done by the University of North Carolina, 60% of burglars who have been caught and convicted have admitted to avoiding homes with a security camera system in place. They simply don’t want to be caught on video.

Order security cameras on emcsecurity.com and take 20% off your order with coupon code “CUSTOMER”.